Traditionally, members of the Bujinkan wear wappan (patch), hoshi (stars) and obi (belt) with their gi (uniform) which vary to signify rank. The Bujinkan grading system consists of 9 levels of training up to the level of Shodan (1st dan) and then a further 9 levels following Shodan to reach Judan (10th Dan). Typically, it takes approximately 3-5 years to reach the rank of Shodan. The rank of 9th kyu – 4th dan may be awarded by the dōjō instructors, however, the rank of 5th Dan can only be awarded once a student successfully passes the Sakki test (see below). Ranks of 6th Dan and above require regular training at the Hombu in Japan or with a Shihan/Daishihan.

Gradings take place throughout the year and are usually carried out in an informal environment, most of the time the student is not aware that they are being graded until it is awarded. The information below is for reference only and students may simpy wear a belt only if they wish.

The wappan is a round patch with the Kanji translation of the Bujinkan Dōjō at its centre and it is placed on the gi on the left-hand side of the chest over the heart. The wappan come in three colour combinations and these differentiate between kyu, dan and upper dan rank. 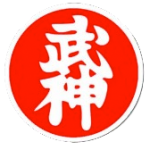 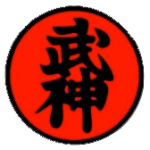 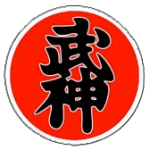 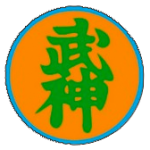 Soke Hatsumi has his own colour of wappan and this identifies him as the head of the Bujinkan Dōjō. 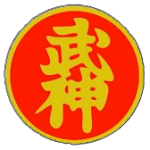 These are small stars that are silver or gold and they are placed above the wappan to denote kyu or dan level.

Sakki in general means intent to kill. ‘Sakkijutsu’ is the ability to sense the thoughts and intentions of an attacker that arise from their conscious or unconscious mind. The essence of the Sakki test is to feel this intention and to evade the attack. Soke Hatsumi and Daishihan (with permission from Soke) are the only ones permitted to administer this test. Once a student passes the Sakki test they are awarded Godan (5th Dan) and are entitled to a teaching license (Shidōshi Menkyo). Before being eligible for the Sakki test students must be Yondan (4th Dan) for at least one year and have proof of rank with official certificate from the Hombu.

The Sakki test is administered with the student in seiza position and eyes closed while Soke or Daishihan stand behind them with a sword (nowadays a shinai – although in ancient times it was a live Katana). Soke or Daishihan will attempt to make a connection with your Ki (energy) and then throw an intention to kill you while striking down to your head with the shinai. If you are ready then you will sense this intention and evade the attack (usually by rolling away). If you move too soon (before the strike is initiated) you will be required to start again. If you are hit on the head with the shinai then you fail. Students are only afforded two attempts at the Sakki test. None of your regular senses are of use during this test as you cannot hear or see the sword coming – the only way is to feel it.

Important note: only Shidōshi Menkyo (licensed teacher) or Shihan (senior teacher) of the Bujinkan Hombu can teach and officially rank students in Bujinkan Budō Taijutsu. Shidōshi-ho (assistant teacher) who is Yondan (4th Dan) can teach and award rank (up to one rank below their own) if they are under direct supervision of a Shidōshi or Shihan and they agree with such rank. It is therefore important to make sure that your instructor has these credentials and can show proof of Shidōshi Menkyo, Godan or that they have a supervising Shidōshi Menkyo or Shihan. Someone who is ‘teaching’ Bujinkan Budō Taijutsu without the proper rank or licensing is breaking the rules of the Bujinkan Hombu and subsequently any rank awarded by such persons are unofficial and not recognised by the Hombu.

“Looking for the meaning of life, one man can discover the order of the universe. To discover the truth, to achieve a higher spiritual state, that is the true meaning of Ninja”
-Masaaki Hatsumi-